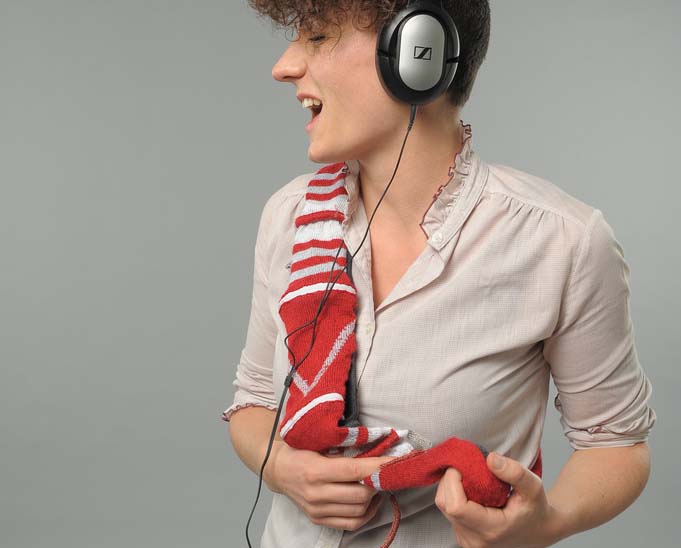 In my lecture, I will present my practice-based doctoral design research project, completed in 2014, in which I investigate the design of unfamiliar interfaces to encourage design in use. I will start with an overview of the roles of designers and users in different design processes, and discuss social and radical constructivist viewpoints in design theory. I propose formal estrangement as a suitable design method, based on the pragmatist idea that it takes a „crisis of action“ to perceive new things. I will show research results including Wavecap, Undercover, Shuffle Sleeve and draw conclusions using ecological concept theory, actor-network theory, and Peircean semeiotics. The lecture will be held in German.

Katharina is a postdoctoral researcher at Universität der Künste, Berlin, and Borås School of Textiles in Sweden. She conducts research in human-computer interaction, electronic textiles, and design methodology. She is co-founder of Design Promoviert—a student-organized doctoral colloquium—and manager of the Design Research Network—an online forum for young researchers.

Reflection: When Practice is Research

(A note on Katharina Bredies’ Lecture by Rosan Chow)

Katharina’s practice-based doctoral research project was different from Tara’s. If we use the more established language, we might describe Tara’s research as applied research while Katharina’s as basic or pure research: it was done to gain knowledge without any immediate practical application in mind.

Katharina reflected on a basic assumption in design, namely ‘use’. We are trained to design for easy-to-use. Drawing on Lucy Suchman and others, Katharina drew attention to the fact that people are creative improviser who repurpose (Umnutzen: my translation) designed objects to get things done, thereby deviating from designer’s plan and intention.

While deviation of intended use is often seen as a problem in User-Centered-Design and Participatory Design, it represents an opportunity in Critical Design and for Katharina as well.

Her central assumption was that use is similar to design as basic cognitive process. Her project was aimed to increase understanding on how to support repurpose of material objects by users. I see her project could be positioned in the discourse of ‘Infrastructure Design’ (Pelle Ehn) and ‘When Everbody Designs’ (Ezio Manzini) or the more general Open Source or Fab-Lab movements.

She said that theory was like seasonings, without them, practice would be tasteless. She drew on Klaus Krippendorf ‘constructivism’ and Wolfgang Jonas ‘Luhmannian systems theory’ to inform her project. She interpreted and materialized theoretical concepts (Irritation, Formverschiebung) into functioning prototypes with variables (structure, process, situation-dependent, situation-independent). She conceived these prototypes by using the method ‘Rip + Mix’. She emphasized that the functioning prototypes were not ‘products’ but rather research instrument for testing/evaluating/understanding. She used the method Objective Hermeneutic to interview and observe ‘users’ handling these prototypes. She showed a fairly elaborated diagram representing her research results and discussed several interpretive frameworks at the end.

Right at the beginning, she talked about the different roles of designer and user in User-Centered-Design, Participatory Design, Non-Intentional Design and Critical Design. The discussion was very inspiring, but I was more interested in Katharina’s role in her research. The ‘users’ in her project seemed to play a rather minor role as in the UCD process. Katharina was, to me, playing the major role of a (traditional) researcher conceiving, planning and realizing an experiment.